Passage to Cape Town – Part 2: Got there!

It was midnight, the sky mottled dark grey, the sea black - but for two hours we witnessed an extraordinary light-show under the boat.

The sea around us was filled with an incredible number of bioluminescent creatures and in this way Nature illuminated an amazing spectacle: Ketoro was in the centre of a huge fish bait-ball, which was using us as shelter from the dozens of dolphins seeking to eat their fill.

Bioluminescence in the sea (tiny organisms that emit light when agitated) showed the bodies and highlighted the shapes of every fish and dolphin; and the sea at our bows was alive with constant movement and ever-changing patterns. As the boat surged forward on a wave, hundreds of fish fanned forward and outwards in an arc, while the dolphins leapt at them - some left their place where they were playing in the pressure wave at the bows, others came from the sides to corral the fish and send them back under the boat where the game began again.

Swimming dolphins trailed broad bright ribbons of light where the bioluminescence in the water streamed off their fins and tails - alongside the boat, these highlighted torpedo shapes trailed their bright wakes as they surfed the waves, as they surged through the flower-pattern of fish, leaving black water passages in the luminescent fish ball as the fish fled.

And then we saw a different shape: the flat broad muscular predator with characteristic sideways tail motion. It was very quick - a dolphin sped at it, there was a short sound and the shark left them to their ball. Nature was at work, and if it was not for the bioluminescence we would have been oblivious of the drama in the water beneath us.
This was a fantastically memorable experience on our last passage: the second phase of our journey to a home base in Cape Town.
We left East London with the prospect of a few days of great down-wind sailing… and so it happened. Although the winds were fairly strong from the start, the screecher sail coped well and made for fast sailing.
But it was COLD! And we have become weak and pathetic after years of sailing in the tropics. And… these cold far-southern-latitude winds were from behind so there was no protection in the cockpit. What to do? Close up! Never mind streamlining.... close up the canvases! We made like a huge tent on the water…. And smiled! What’s more: that straight, broad back canvas acted like another sail (as in those old square-rigger boats) and probably increased our sailing speed!
But then the winds became stronger, too strong for the screecher sail, and the deck became a scene of frenetic activity. We had to furl the sail before it got damaged... but it would not furl properly in the strong winds. The bottom of the sail had a good tight wrap but further up it was loose and within minutes the winds were in, had opened up the wraps further and the material was flogging and flapping noisily, high above us, in danger of ripping.

What to do? We decided to drop the sail immediately and as it came down we fell onto this 18m-long monster to hold it down in the winds, secured it to the trampoline with ties, and resorted to our trusty newly-bandaged headsail.
This gave us peace for hours, but the taped repair made in East London did not last long (5 years seems beyond the sell-by date for adhesive sail tape) and we witnessed a less attractive fluttering ribbon than that created by the bioluminescent dolphins!

There was more to-and-fro with sails (more up-down, more small problems to solve) but nonetheless we actually had a really successful sail and passed Cape Agulhas: the southernmost tip of Africa. Our first seals in over 4 years came to play! They lifted their curious noses out of the water and appeared to smile as they regarded us with their beady eyes then flipped and turned and dived down. Then there were odd projections out of the water… A seal on its back, the only parts visible a shiny black nose and two flippers held up to warm in the sun! Fun animals, these.

Strong winds came in again: still from our stern, but too strong for the screecher – more sail changes. By now the boat was a mess, with baby net in tatters, lines chafed, damaged sails strapped down on the trampoline, main sail tied to the boom with bright yellow ties to prevent it lifting in the strong stern winds; but Ketoro was certainly making way quickly! 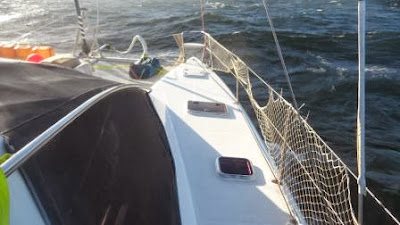 We were well ahead of schedule and as we saw False Bay ahead of us we realised we would get to Simonstown that day.

Thoughts: it will be too late to call the marina (about 6:30pm) but still light so we can anchor outside and go in tomorrow.

And the winds built... And then we were in a howling 42 knot gale, with resulting steep waves that we surfed. But a way down the wave, the (reefed) sail would catch a huge gust and Ketoro would slew and threaten to broach.... We had little control in these circumstances so took in the last of the sail and let the engines and autopilot do their thing.

Squinting into the setting sun through the un-clear "clears" (a boat's plastic windscreen) we tried to navigate our way past Simonstown naval base and into the small-craft harbour area. That identified, we had to drop anchor. Quickly.

Picture: 42knot gale, Irene in foul-weather gear up front, Rolf desperately trying to hold the boat forward into the wind.... And we fell back, far too close to another yacht. Swear.
We must lift the anchor and try again (shouting over the wind).

Rolf as before (still); Irene pulling up anchor chain.... And a rich crop of kelp and seaweed. Red, purple, brown, green, slimy, big leaves, small leaves on stalks, soft, hard.... All glued together with gloop and brought up with the chain and making its way into the locker to jam everything up. Swear.

Rolf as before (again!); Irene ripped and pulled and flung kelp and mud in chunks large and small... And they were blown back onto her, and onto the deck, and onto the clear screen, and some off the boat too, happily!

It was all too slow; the sun was down, light was starting to go, we had to try to anchor again - and then we got a call on the radio. The marina pub dwellers had seen us and assured us there was a berth open, if we were feeling lucky enough to manoeuvre in the storm. So we prepared fenders and mooring lines and gave it a go.

The wind had not abated and this boat with its high sides and windage, is a little headstrong when manoeuvring in the confines of a marina in 42 knots. Irene on the bow with the long lines to throw, Rolf yells above the wind "we've only got one shot at this".

Well, the shot was taken, was accurate, we tied on, we were home. Hello, False Bay Yacht Club!

We went to that pub!

Rolf and Irene
We are a South African couple enjoying cruising on our 40' Admiral catamaran, Ketoro.